Stanford and UberCloud Take Living Heart Simulations to the Cloud 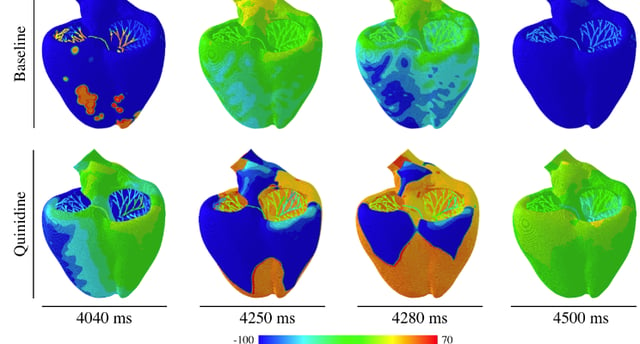 Cardiac arrhythmia can be an undesirable and potentially lethal side effect of drugs. During this condition, the electrical activity of the heart turns chaotic, decimating its pumping function, thus diminishing the circulation of blood through the body. Some kind of cardiac arrhythmia, if not treated with a defibrillator, will cause death within minutes.

Before a new drug reaches the market, pharmaceutical companies need to check for the risk of inducing arrhythmias. Currently, this process takes years and involves costly animal and human studies. In this project, a new software tool has been developed enabling drug developers to quickly assess the viability of a new compound. Such a tool will increase the number of successful drugs that reach the market, while decreasing cost and time to develop them, and thus help hundreds of thousands of patients in the future.

The Living Matter Laboratory of Stanford University has been supported by Living Heart Project (LHP) members from Dassault SIMULIA (with their Abaqus 2017 software), Hewlett Packard Enterprise (the sponsor), Advania (with free access to cloud hardware), and UberCloud with its novel software container for Abaqus. The breakthrough is based on the development of a Living Heart Model (LHM) that encompasses advanced electro-physiological modeling.

Based on the Abaqus 2017 software the computational model is now able to assess the response of new drug compounds rapidly and inexpensively. However, the creation of a suitable model requires taking a multiscale approach that is computationally expensive: the electrical activity of cells is modelled in high detail and resolved simultaneously in the entire heart. Due to the fast dynamics that occur in this problem, the spatial and temporal resolutions are highly demanding.

Another project goal has been to develop a much faster model enabling us to calibrate the healthy case, which was assessed by electro-cardiogram (ECG) tracing that recapitulates the essential features as shown in the following diagram.

During the final simulation phase, we have adapted all features of the model to a much finer mesh with now 7.5 million nodes and 250,000,000 internal variables that are updated and stored within each step of the simulation. We have run 42 simulations to study whether a drug causes arrhythmias or not. With all the changes above we were able to speed up one simulation by a factor of 27 which then (still) took 40 hours each, using 160 CPU cores on the new HPE system in the Advania Cloud equipped with latest Intel Broadwell E5-2683v4 nodes and Intel OmniPath interconnect. For each case, we let the heart beat naturally and see if the arrhythmia is developed.

The Figure above shows the application of the drug Quinidine, i.e. the evolution of the electrical activity for the baseline case (no drug) and after the application of Quinidine. The electrical propagation turns chaotic after the drug is applied, showing the high risk of Quinidine to produce arrhythmias. Quinidine is an anti-arrhythmic agent, but it has a high risk of producing Torsades de Points, a particular type of arrhythmia. It shows the electrical transmembrane potentials of a healthy versus a pathological heart that has been widely used in studies of normal and pathological heart rhythms and defibrillation. The propagation of the electrical potential turns chaotic (bottom) when compared to the baseline case (top), showing that our model is able to correctly and reliably predict the anti-arrhythmic risk of commonly used drugs.

Reference: This article is a short version of an extended article which first appeared in HPCwire on Sept 21, 2017.