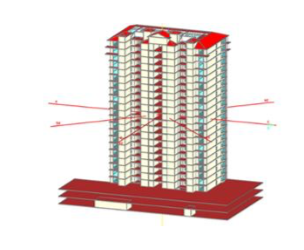 It was proffered by competing experts that defective exterior plaster was a cause of the high humidity conditions. Exterior plaster failure included blistering of the coating system and saponification of the coating and substrate. Moreover, these experts opined that the existing mechanical system for each condominium unit was adequate to handle the dehumidification such that the ABG was caused by the moisture intrusion through the exterior wall system. Their opinion was that the negative air pressure was acceptable for 15/20 story towers.

Because of these competing opinions and the inability to field test the experts’ hypotheses, PBBL Law, for the first time in their history, chose HPC modelling to determine whether damage was caused by moisture transfer through the plaster coated exterior walls or that it was the result of negative pressure in the living units. Also, by advancing the modelling, HPC was used to determine the effect of the negative pressure and high humidity in the condominium living environment if left unmitigated.

Read in THIS HPCwire ARTICLE how the project team consisting of the end-users David Pursiano and Robert Simon from PBBL Law Offices, the software and expertise providers Florian Antretter and Matthias Pazold from Fraunhofer Institute for Building Physics, and the HPC Cloud expert Baris Inaloz from UberCloud, tackled this CFD problem and helped PBBL Law in court to prove their client’s case.

UberCloud helps engineers run their simulations with high performance and reliability. We achieve this by helping enterprises...