UberCloud Team 199 led by Scott W. Sides, Senior Scientist at Tech-X Research in Boulder, studied adhesion dynamics for surface-tethered chains entangled in a polymer melt, using the molecular dynamics package LAMMPS which is widely used in academia and some industries.

LAMMPS has potentials for solid-state materials (metals, semiconductors) and soft matter (biomolecules, polymers) and coarse-grained or mesoscopic systems. It can be used to model atoms or, more generically, as a parallel particle simulator at the atomic, meso, or continuum scale. 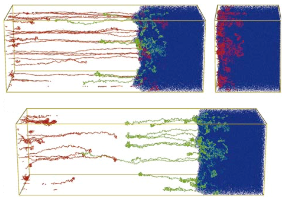 In a first step of this cloud experiment the LAMMPS code has been ‘containerized’, and then the simulations have been performed on up to eight 16-core high-performance computing nodes and scalability studied in the Amazon AWS Cloud. You can download this case study in full below: